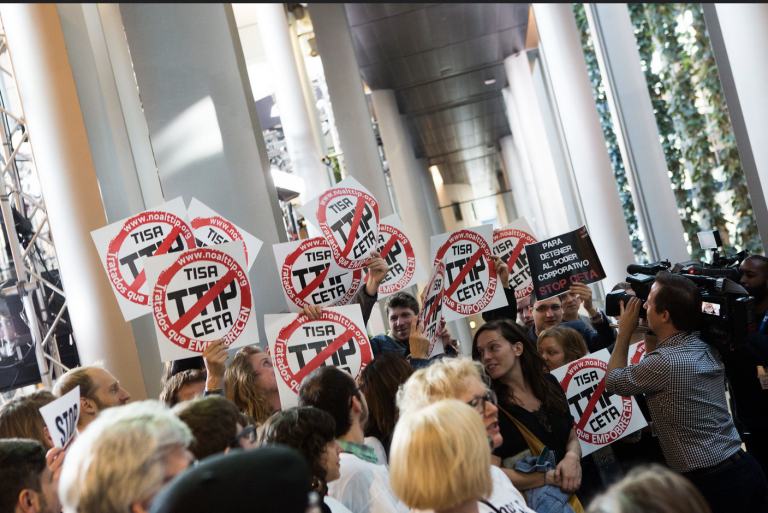 The European (Dis)United Left (GUE-NGL) and European integration: the unresolved paradox continues in the 2019 EU elections

The left has had a historically problematic relationship to European integration, which is reflected by the positioning of the European Union (EU) parliament political group European United Left–Nordic Green Left (GUE-NGL), situated to the left of S&D and the Greens. From its early days in the 1950s up to now, the idea that the European Economic Community (and, later on, the EU) was a capitalist club has been highly present. The unresolved debate within the left about what to do in regard to European integration exploded in June 2016, when British left-wing campaigners working together in campaigns such as Stop TTIP (the EU-US trade agreement) found themselves working on opposite sides of the Brexit referendum.

The paradox among the GUE-NGL group stems from the fact that they often criticise the EU for not doing more to reduce inequality and poverty, for not protecting enough public services and workers, or for not fighting climate change ambitiously enough. At the same time, GUE-NGL MEPs are also very cautious in defending European integration and the legitimate authority of EU institutions to implement Europe-wide policies. Perhaps the best illustration of the ambivalent position of GUE-NGL in regard to European integration is the (lack of) support for establishing a transnational constituency for European elections, given their split vote in regard to the creation of transnational lists for the 2019 EU elections. As this graph below makes clear, GUE-NGL was extremely divided in the vote, and was the only party to the left of the right-wing EPP to vote mostly against transnational lists.

The most evident illustration of GUE-NGL’s ambivalence towards the European project is the very fact that they do not have a common manifesto or programme for the 2019 EU elections. In consequence, the various members of the European left group have their own political programme. A case in point is the Spanish political party Podemos, who does not only have a programme for the upcoming European elections (available here), but also a ‘Treaty for a New Europe’ (available here). Both documents reflect the paradox that GUE-NGL face: it includes many ambitious proposals in important subjects such as citizen participation, public services, migration, environment or inequality, but at the same time reproduces the idea that the EU is some sort of autonomous ‘bureaucracy’. For instance, on page 5 of the Podemos’ programme, it is argued that “the Union has the opportunity to become once and for all an entity that serves citizens, and moves away from the machinery that limits our desires and aspirations that we have known so far”.

Similarly, the French member of GUE-NGL, Mélénchon’s La France Insoumise, has its own programme, which states in page 4 the following: “This Union has devoured our social gains. It attacks our pensions and destroys our public services that must be constantly commodified. It imposes free trade against people and nature. It pollutes our lives and our health. The oligarchy that runs it uses the shackles of the European treaties to control the peoples. The Greek crisis has definitively shown the violently undemocratic character and the liberal blindness of the current institutions of the European Union”. The GUE-NGL has however a common Spitzenkandidaten, Violeta Tomić, an MP member of the Slovenian party called The Left. Tomić participated in the Maastricht debate alongside fellow Spitzenkandidaten Frans Timmermans (S&D), Bas Eickhout (Greens), Guy Verhofstadt (ALDE) and Jan Zahradil (ECR), but has a much lower European profile than its rivals. Additionally, GUE-NGL is finding it difficult to get across its narrative of fighting both the Neoliberal centrist parties illustrated by Merkel and Macron, and also the emerging extreme right parties, illustrated by Salvini and Orban.

The narrative articulated by GUE-NGL is aimed at capturing as many votes to the left of the S&D group, conceived as a ‘light Neoliberal’, but has struggled thus far. The lack of resonance of the GUE-NGL’s ideas so far can perhaps be explained by the lack of pan-European coordination. There is an inherent tension between GUE-NGL and DiEM 25, the transnational political party led by Yanis Varoufakis that attempts to create not only a European political group, but a transnational political party. Interestingly, DiEM 25 has a concrete European programme and Varoufakis himself is running as a candidate in Germany, which represents well their attempt to Europeanise politics. The fact that DiEM and GUE-NGL, two political groups that appeal to the same left-wing constituency to the left of the Socialdemocrats, are running in completely separate platforms (and in some cases even running against each other, such as in Spain, where DiEM is running alongside Actúa, competing against Unidas Podemos Cambiar Europa, and France, where DiEM is running with Génération.s, competing against La France Insoumise) reflects the division of the left when talking about European integration. In fact, by not having a coherent pan-European programme and strategy, some members of the GUE-NGL flirt, rather dangerously, with the idea of ‘socialism in one country’.

The type of social policies that GUE-NGL would like to be brought forward is very clear. For instance, Podemos’ programme for the EU elections is full of interesting proposals, such as giving legislative initiative to the European Parliament, the establishment of a parliament of the Eurozone, a European tax for transnational digital companies, a European minimum salary or a Green New Deal. However, it is unclear how those policies could ever be actually implemented at the European level. The Commissioners are selected by EU member states, and the president of the European Commission is proposed by the European Council. The Council of the EU remains a much stronger institutional actor in comparison to the European Parliament, and gives national governments a much stronger say in shaping EU policies. Considering that the only EU member state that is governed by a member of GUE-NGL is Greece with Syriza, and that Syriza has been in talks with the S&D group, it seems rather obvious that GUE-NGL does not offer nowadays a viable alternative. Additionally, the central campaigning issue for GUE-NGL for the EU elections seems to be climate change, a topic to which the group has devoted particular energy, even publishing a ‘Climate Emergency Manifesto’. While the manifesto is very ambitious in regard to the demands made to the EU, it is not only unclear how such demands can be accomplished institutionally (considering that an intergovernmental agreement is unlikely), but also GUE-NGL can hardly compete with the Greens regarding environmental policies, who in addition have  a concrete and coherent European programme.

The run-up to the 2019 EU elections reflects the (lack of) unity of the GUE-NGL, particularly when dealing with the EU’s future. While GUE-NGL has very ambitious policy proposals, but lacks a European political strategy, and does not even have a common European programme.